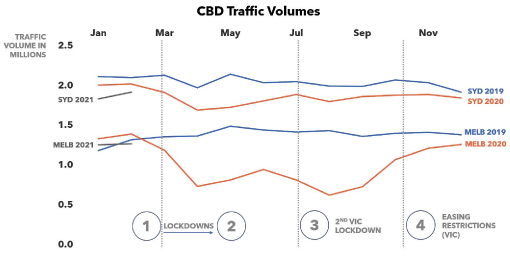 The impact on Covid on driving behaviour, and where to from here

After a tumultuous year, we’re left with questions about how some of the new consumer behaviours we are seeing will persist into a post-COVID world.

One that’s worth considering in the context of automotive servicing is driving behaviour. Many people were working from home, so one might assume traffic volumes would be well down, but a lot of the trips they replaced would have been on public transport. Closed international borders have also led Australians to holiday locally, which would have helped maintain volumes.

As a broader guide, while new car sales were well down in 2020, used car sales were booming, suggesting a lot of households recognised a need for a second (or third) car to cover off their growing use cases.

Now, with many aspects of life having returned to ‘normal’, and the vaccine rollout getting going, what does driving behaviour look like, and what can we expect to see in the months ahead?

To unpack this, let’s take a look at the New South Wales and Victorian data from InTelematics. Looking at the NSW data (covering 39 LGAs that include Sydney, Central Coast, Newcastle, Wollongong, and portions of the South Coast), we can see that the most significant 2020 dip was in Mid-March (during the main outbreak), with traffic volumes recovering to be largely in line with 2019 by June.

This is clearly different to the VIC data (covering 31 LGAs focused on Melbourne, Geelong, and the Mornington Peninsula), which didn’t return to parity until late in the year off the back of the second lockdown in July.

Ultimately though, this clearly shows that by the end of 2020, Australians were out and about at similar levels to the year before.

What it doesn’t tell us is what those trips were – had they returned to the office, or were they still driving for leisure purposes?

One way of exploring this is to look at traffic volumes within the respective CBDs as a proxy for broader activity. Initially, lockdowns and travel restrictions led to a drastic decline in traffic volumes for both Sydney and Melbourne. The absence of a second lockdown in Sydney saw traffic volumes returning to a higher level by the middle of the year, with Melbourne again not achieving this until late in 2020.

It is important however to note that at the end of 2020 both Sydney and Melbourne CBDs remained below 2019. This is supported by the ACA SME COVID-19 tracker report, which has shown small businesses in Sydney to have around a third of staff working from home. Looking to the future though, we have a level of optimism about business activity. Traffic volumes in Melbourne’s CBD seem to have returned to ‘regular’ levels in early 2021, and Sydney numbers are heading in the right direction.

So, what does this all mean in practice? For us, there are three main takeaways:

1. People largely replaced work travel with personal / leisure trips through 2020 (except for when they were under lockdown).
2. Commuting and business travel seem to be returning to pre-COVID levels, increasing that element of vehicle usage.
3. With international borders closed, many Australians will continue to embark on short and longer distance road trips.

Ultimately, all of this suggests that average km traveled will regain lost ground, meaning vehicle servicing and maintenance schedules will need to be met. Alongside this, opportunities for parts and accessories (particularly 4WD-related) are likely to continue over the short to medium term.