The year was 1929 and Australia was in the middle of a revolution that would alter the landscape in a way that couldn’t be imagined . . . the car revolution.

More than 600,000 Australians (1 in every 11) could claim they owned a motor vehicle, a stark rise from the one-in-55 figure from the turn of the decade. Car prices were coming down and the middle class could now afford to get into the market. More cars on the road led to more petrol stations and more and improved roads. Car manufacturing giants Ford and GM had their own plants here, and were mass producing vehicles.

A new industry had developed, and more and more garages and motor mechanics were opening and jumping on board the revolution. It soon became apparent that some form of record keeping was required to identify and acknowledge new businesses in order to give respectability and legitimacy to this nascent industry.

The arrival of GASSA was very much a low-key affair, barely raising a mention outside those involved.

‘High standards and better service’ was GASSA’s philosophy, and while the economic climate was poor following the New York Stock Exchange crash of October 1929 and resultant Great Depression, the automotive industry proved valuable in getting Australia back on its feet quicker than many other countries.

In August 1945, during World War II, the association changed its name to the Queensland Automobile Chamber of Commerce (QACC) – a sign that the industry and its influence was continuing to grow.

In fact, the Association had grown large enough that it had enough members to offer skilled workers to the Australian Government to assist in the war efforts. Association President W. J. Johnson claimed, “There are hundreds of garages throughout this state with machines almost idle, and employing thousands of men, which could be used for war work.”

The QACC would rebrand for a third time in December 1976 when it joined forces with the national Motor Trades Association to become the Queensland Motor Industry Association (QMIA).

This merger was a big deal for the motor retail industry. It was the first time the entire automotive industry was joined under a single employers’ organisation, creating a unified association that provided support for all aspects of the industry. 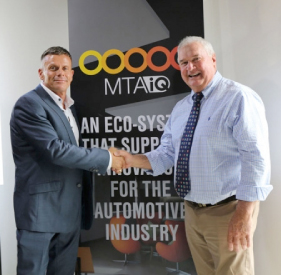 Around this time, the QMIA moved into the training sector. It would grow from modest beginnings to become, 40 years later, the MTA Institute and the largest private provider of automotive apprenticeships and training in Queensland.

The training institute was initially established to deliver business training courses to Association members and then later the general public, before adding six 12-month Certificate II Automotive traineeships to the offerings in 1997 with the objective to be recognised as the leading VETEC Accredited Training organisation in the industry.

After a number of name changes through the years, the Association settled on Motor Trades Association of Queensland in 1985 when, on Monday, January 21 at a special General Meeting of the QMIA, a decision was passed by majority vote to change the name.

Since then, MTA Queensland has gone from strength to strength, a leader in an industry that is moving and changing – something reflected in its logo which was designed to depict the association’s dynamic movement into the future, with the five circles representing pistons, wheels, cylinders, gears and shafts, and the yellow-to-red colour spectrum represented the energy cycle of combustion.

In 2010 it was announced that MTA Queensland had approved the development of a land construction contract at Building 8, 2728 Logan Road, Eight Mile Plains, to construct a headquarters and state-of-the-art training facility. Construction was completed in October 2011 and MTA Queensland moved into the new headquarters – the site we call home today – on December 12 that year. The training facility would be named the Sir Jack Brabham Automotive Centre of Excellence on October 13, 2012 at a special unveiling event attended by the Premier of Queensland, the Hon Campbell Newman MP and Sir Jack Brabham himself. 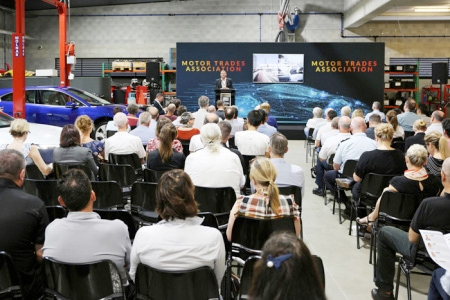 2017 saw the launch of the MTAiQ, Australia’s first automotive innovation hub. With MTA Queensland having long been committed to being leaders in innovation, the hub was established to stay ahead of the massive technological changes occurring in the automotive industry and was designed to create opportunities and growth through collaboration between industry leaders, entrepreneurs, innovators and industry experts.

In line with that philosophy, MTAiQ hosted the first Carmageddon event on 7 March, 2017, a one-day symposium focusing on the innovations and developments in the industry and which featured attendees and stakeholders from senior government, academia, the innovation eco-system and automotive industry businesses.

2017 also saw the launch of the MTAQ Racing Team. Led by a team of dedicated enthusiasts and MTA Institute trainers, with apprentices comprising the bulk of the race team support crew, the MTAQ Racing Team entered the Queensland Hyundai X3 Series Cup and continues to race in that series to this day.

It’s been quite the journey to get to where we are from that one night in September of 1929 and there have been countless changes and advancements in those 90 years.

And yet, if you take a closer look at the current landscape of the automotive industry, the similarities between the climate now and that seen during the inaugural years of GASSA are uncanny.

The automotive industry is undergoing a period of disruption and change many people say hasn’t been witnessed since the rise of the automobile more than a century ago.

Electric, hybrid and other alternative fuel vehicles are fast becoming the expected and desired vehicle of choice for drivers around the world. Companies are investing billions of dollars into technology that will fuel the automotive industry revolution. It is surely undeniable that a large part of the future of the automotive industry will be electric.

Prior to the 1920’s and GASSA, the horse-drawn carriage was the popular mode of transport. Cars were only for the wealthy and those in cities who could access fuel and parts. They were mostly imported or produced in very limited numbers and seen more as a novelty then a viable means of getting around. This pile of fuel-consuming machinery could never produce the performance of the reliable horse and cart. It couldn’t cover the rough terrain of the outback without breaking down or get from town to town without running out of fuel due to a lack of infrastructure. Yet, the car would come to dominate and, for the next 90 years, kept the nation moving.

Electric and hybrid vehicles have faced much of the same skepticism. High prices, unreliable or insufficient technology and a lack of charging infrastructure have for a long time been barriers to supporting electric vehicles. However, with the rapid rate of technological advancement and investment we are witnessing, many of these issues are no longer a problem, or soon won’t be.

As a long-time champion of innovation, MTA Queensland identified the upcoming disruption early and understands the need to stay ahead of the game to provide direction, leadership and support to its members.

While we can be fairly sure where the automotive industry is heading, 90 years of history has taught us that things are in constant motion and nothing is set in stone. What we do know, however, is that no matter which path the industry goes down, the association, no matter the name it operates under, will be present to witness it and challenge, strive and advocate for the best interest of our members. Here’s hoping the next 90 years are as successful as the previous 90!