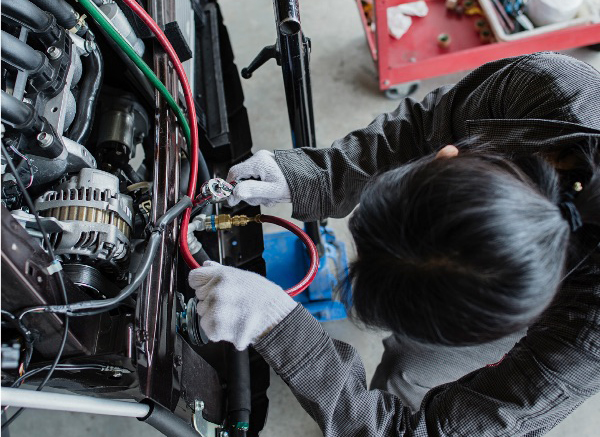 “I am the owner, office and delivery person as well as receptionist. I do requisitioning, inventory and am the first aid officer,” said Tracy. Although a very busy and integral part of the business, in addition to this Tracy joined the APRD committee in 2015 and for more than four years has been advocating and assisting her industry sector, bringing her expertise to the boardroom. Tracy is an asset to the parts recycling industry and deserves recognition for her valuable contributions.

Hatice Hutchinson, owner of All Car Engine Reconditioning Services in Ormeau, re-joined the ERAQ Division as Secretary in August 2019 after one year away. Hatice shares the role with her husband and co-owner Leonard on a one-year rotational basis, so she is well versed in the Secretariat role and adds an incredible amount and knowledge and experience to the committee having been in the industry since 1996.

Although representing a minority in a male-led industry, Hatice’s capabilities are a force to be reckoned with. In addition to being owner of All Car Engine Reconditioning Services, she also owns a mechanical workshop from this business (AED division), is a licensed motor dealer and is the definition of a one-woman show.

“I do all of the quoting, invoicing, bookwork, ordering and day-to-day management such as job allocation,” said Hatice. “I also run the shop on a daily basis and look after all the social media and digital aspects.”

This knowledge and expertise of the engine reconditioning sector and wider industry combined with her operating skills makes Hatice a respected member of the committee and an outstanding female leader within the Queensland automotive industry.

Andrea McCarthy from McCarthy Panel Works in North Mackay is the only female representative on the NACA committee. She is committed to equality and fairness and has a goal to streamline the sometimes “clunky” industry. Andrea stepped into the position with hopes to not only represent her own business, but also the wider regional business community in Queensland, as well as to represent women in a predominantly male industry. With integrity and insight she offers her opinions, experience and knowledge to the committee meetings and is motivated to make a tangible enhancement to the paint and panel sector.

“I’m committed to progressing the industry so that every person on every level can benefit from a better, safer, more effective and efficient workplace,” said Andrea.

“I joined the NACA committee to have the opportunity to voice my views and concerns from a regional perspective and to represent women within my sector and the greater industry.”

As an outstanding businesswoman and role model within the automotive Industry, Andrea is an MTA Queensland 2019 Women in Industry Award finalist and last year became the first female to be elected to the Board of I-Car Australia.

Sharine Milne (affectionately known as Spanner) is the owner and operator of RHD Classic Supplies & Services in Aitkenvale and holds the QMID Vice-Chairman position. She brings a wealth of experience and passion to the role having started her motorcycle mechanical apprenticeship at 25 before going on to complete a Diploma of Management and becoming the owner of a business. And she did all this within 10 years.

A hands-on boss, Sharine is always looking for ways to improve not only herself but her staff through training and is also a “full time mechanic, bookkeeper, front of house, spare parts interpreter and modification specialist.”

As well as this, Sharine is a proud Indigenous woman, a mentor for young people and she works in partnership, when called upon, with Blaq Diamond – a First Nation’s Women Empowerment business that focuses on supporting indigenous women in discovering their potential.

Sharine’s contribution to the industry and greater community as a female role model and highly experienced technician, as well as her outstanding management of the business, has not gone unnoticed. She has previously won the Queensland Trainee of the Year and became a finalist in the Australian Apprentice (Trainee) of the Year and was a 2019 regional finalist for the Queensland Training Awards Small Employer of the Year. RHD was the 2016 winner of the MTA Queensland Community Award and is a finalist again this year, while Sharine herself is a finalist for the 2019 MTA Queensland Women in Industry Award.

“Being a mentor for women and young people is a lifestyle choice for me,” she said. “I hope that by being one of the only sole female indigenous owners of a motorcycle shop in Queensland, it helps young women in the automotive industry realise their potential. I encourage women to ‘break the mould’ and prove that you can do anything regardless of gender or preconceived stereotypes.”

Kellie Dewar, Deputy CEO for MTA Queensland said, “Having female representation on the MTA Queensland Divisional committees is incredibly beneficial to the betterment of our industry. Each of the four women represent a minority in the automotive industry and having them in a position of power where they can bring forward their unique perspective, insight, and ideas to solve problems is extremely valuable and something I hope to see spread through all Divisions.

“Hatice, Andrea, Sharine and Tracy are role models to women currently in the automotive industry, as well as proactively supporting women wanting to make a start in the sector. They are a testament to the businesses they own and operate, and we are immensely proud of them.”