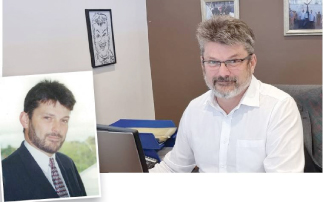 AFTER 21 years in the General Manager seat at the Tasmanian Automotive Chamber of Commerce (TACC), Malcolm Little retires in December. Before he went fishing, we caught up with him to discuss the highlights of his time in charge of TACC…

How long have you worked in the automotive industry?
I joined TACC in 2000 after 18 years in the banking and finance industry – the last eight years running the leasing division of the local bank, Trust Bank. This is where I gained the connection to the automotive industry, through relationships with car dealers and heavy plant and machinery.

What inspired you to join the industry?
When I saw the advertisement for the role, I wasn’t aware of the association, but research soon led me to an understanding of the valuable part TACC has in ensuring Tasmanian members are heard and supported.

Working at TACC has been varied.
I began work in October 2000. Those 21 years have flown by. I have done my best to represent the interests of members to government and consumers. Over the last 18 months, I have also managed OurAuto, the Victorian Automotive Chamber of Commerce (VACC) commercial business. That was a very interesting time working with a sales team based in Queensland, New South Wales, Victoria, South Australia and New Zealand, during COVID-19. The team has done a wonderful job maintaining sales through lockdowns, over video calls and with limited team interaction and training, while still returning an above budget result for the Chamber.

What are your proudest achievements as TACC General Manager?
The big wins started with getting all the Tasmanian new-car dealers to join TACC. They previously had their own association.

Then there was the development and introduction of the Motor Vehicle Traders Act. This helped dealers and consumers, and created consistency in the new and used market. Next, after years of lobbying, was an amendment to the Duties Act that revised the stamp duty and management of demonstrator vehicles and service loan cars. This allowed dealers to provide customers with loan cars that were stamp duty exempt, saving dealer-members thousands of dollars annually and enabling them to comply with franchise agreements – with less compliance and audits from the stamp duties office.

More recently, again after years of lobbying, we got the Sale of Uncollected Good Act revised. This has modernised the process for disposing of abandoned goods and the recovery of unpaid invoices for the industry. Other achievements include member growth. When I joined, TACC had 270 members. It now has 400, which is a significant result when most associations struggle to keep members.

Also, to have improved the income to TACC/VACC by introducing TACC Accreditation, Roadside Help, an awards dinner, and Apprentice Group Training. TACC now makes a significant financial contribution to VACC.

None of this would have been possible without the support I have had from members, the great committees over the years and wonderful fellow staff and the support and trust of VACC management and the VACC Board.

What is the biggest challenge or change facing TACC members in the coming years?
Over the years, I have had a wish list of things I wanted changed and I am proud to say I have achieved all but one of these items, many taking years of lobbying. The remaining one I and the TACC Executive Committee is yet to see is the State Government introducing mandated roadworthy checks. This has been a hard-fought battle I fear we will not win, at least in Tasmania.

What key advice do you have for the new TACC Manager?
I have done my best for members, but the new TACC Manager will bring a new set of skills and experience to the role. Engaging with members is the important part and getting to know the government representatives in various departments will help with information and smoothing the way when seeking change.

What are your closing words for the TACC team and TACC member-businesses?
I will look back fondly at my time with TACC where I have been able to make a difference for both the Chamber and members, the significance of which is far more than I could have achieved in another industry.
To all the people I have worked with and the talented team at VACC and TACC, thanks for the last 21 years. TACC has been around for over 90 years, and I am certain there are many more to come.
On behalf of TACC and VACC memberbusinesses and staff, the Chamber thanks Mr Little for his service and achievements during his time working in the industry.