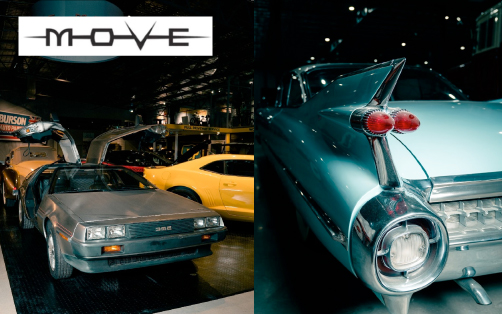 Get a MOVE on!

The Museum of Vehicle Evolution (MOVE) in Shepparton has undergone an impressive upgrade over the past year and is now open to the public.
Victorian Automotive Chamber of Commerce (VACC) President, Mark Awramenko; farm machinery dealer and VACC Executive Board director, Paul Bertoli; along with VACC CEO, Geoff Gwilym, were among the attendees at the official opening in November 2021.

VACC is a major sponsor of the museum, the Chamber unveiling a permanent history wall within the exhibition space as part of the partnership.

“The connection between VACC and MOVE is obvious. Of course, VACC is all things automotive. What is less well known is the Chamber’s long and dear association with regional Victoria,” said Mr Gwilym.

“MOVE is a huge credit to all those who have helped shape and grow the centre, it is magnificent and has to be the best combined motor and museum collection in Australia.”

Mr Bertolli went on to speak highly of Jim Andreadis – a philanthropic contributor and driving force behind the centre’s expansion – and the MOVE board’s efforts.

“Jim has taken a small, specialist car museum and made it into a major drawcard for Shepparton and surrounding areas. I have the greatest of respect for him, and his wife Angela, who have funded and largely constructed large parts of the project. Jim, the MOVE board and volunteers should all feel a great sense of pride in pulling this great project together.”

In conversation with Mr Awramenko, Mr Andreadis insisted, “It’s not over yet. Every time we finish one stage, I can’t help but think about what we can do next. I can see more space being created and an even bigger expansion of the facility.”

MOVE houses more than 60 cars, a notable collection of motorcycles, and fans of big rigs will love the Kenworth Dealer Truck Pavilion that includes tributes to transport industry legends.

Depending on the time of year, attendees are likely to see Chevies, Mustangs, MGs and Jaguar cars, Harley-Davidson and Triumph motorcycles, and Mack, Kenworth, and other trucks.

“The quality of the restoration work is world class. The fact the majority of cars and trucks in the museum have been restored in regional Victoria is a credit to the owners and the tradespeople who worked to carefully bring these magnificent machines to life,” said Mr Gwilym, a one time
City and Guilds body maker.

In addition to motoring gems, there’s a terrific assortment of gramophones, telephones, and radios – and it wouldn’t be Shepparton without a display of iconic Furphy water tanks.

The VACC representatives caught up with Adam Furphy to congratulate him on the Furphy exhibit. It highlights the company’s regional roots and manufacturing history in Australia, which is still going strong today.

Visitors can also browse the Loel Thomson Clothing Collection, a fascinating showcase of 200 years of Australian fashion, and the Farren Bicycle Collection, one of the world’s most important two-wheel displays.

As featured in Australasian Automotive December 2021.